Plant a tree in memory of Barbara
An environmentally-friendly option 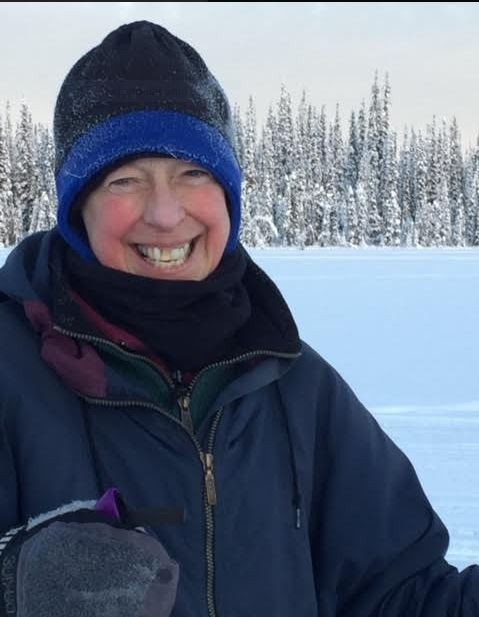 Barb was born in Pittsburgh, PA in 1952. She graduated with honors from Boston University in 1974.

Alaska was Barb’s home state for more than 50 years. After graduating from college, she was drawn to Alaska for the wilderness and the wonderful friends she found here. She became close friends with Ginny Wood and Celia Hunter, who hired her to work for them at Camp Denali in Denali National Park in the early 1970s. She later worked for several years as a wilderness guide in the Brooks Range, taking tourists on kayaking, rafting and backpacking trips.

Barb was a great athlete and a great teacher. She spent several years teaching swimming, cross-country skiing, downhill skiing, and ski mountaineering for Tanana Valley Community College in Fairbanks. Her students were people of all ages and skill levels, and included many elderly people who she taught through the Senior Citizen Swimming Program.

Barb was also a scientist. Barb received a master’s degree in Natural Resources Management from UAF in 1984. While she was in graduate school, she conducted willow research on the North Slope with her dear friend Mike Masters. Barb and Mike later spent an entire summer traversing the Brooks Range. After receiving her master’s, Barb worked as a land management technician for the Fairbanks North Star Borough’s Division of Land Management.

Eventually Barb became a lawyer (graduating with honors from the University of Tennessee law school in 1991), and she briefly worked in private practice in Fairbanks. After that, she worked on the Mental Health Lands Trust litigation, as a law clerk to Judge Mary Greene. When that lawsuit was over, she spent the rest of her career working for Judge Greene and for several other Fairbanks judges.

Barb participated in skijoring and in statewide canine agility competitions, and you have never met a person who loved her dogs more. She always had a golden retriever at her side, and she went skiing or walking every day, even after battling cancer.

Barb was committed to environmentalism and to supporting local businesses. She could often be found at the Farmers Market or hiking on local trails. Always the outdoorswoman, Barb was an avid alpine flower observer and loved the tundra. She was also known for her love of books, her infectious smile, and her kind and compassionate spirit. Barb had incredible strength and determination. Although she was diagnosed with ovarian clear cell carcinoma in 2009, she defied all medical predictions and lived happily for over 11 years after her diagnosis.

Like many Alaskan transplants, Barb had a large network of found family who were very close to her. Barb’s heart was as wild and big as Alaska, and she will be missed by so many of us whose lives she touched.

Barb is survived by her brother Tom Powell (wife Debbie), nephew Wade Powell (wife Christina), nieces Lori Noble (husband Mike) and Jennifer Powell, and five great nieces and nephews (Sebastian, Nathan, Madison, Katelin, and Allison). She is also survived by her Alaska families, the Harbisons and the Matthews, and by her faithful dog Andy. She was predeceased by her loving parents, Edward and Marjorie Powell, and by her three golden retrievers, Nick, Taiga, and Molly.

A memorial celebration of Barb’s life will be held on June 3, 2021. In lieu of flowers, donations can be made to The Nature Conservancy or to the Ovarian Cancer Research Alliance.

Plant a tree in memory of Barbara by clicking here.
To send flowers to Barbara's family, please visit our floral store.

Plant a tree in memory of Barbara
An environmentally-friendly option

Plant a tree in memory of Barbara

4 trees planted in memory of Barbara

You will be forever in our hearts.
Wade Powell and Family

Barb always had a smile. She was a wonderful caring person. It was a pleasure to work with her over the years. She will be missed.

Kindness! Barb overflowed with kindness. I will miss our visits and conversations. She will be greatly missed

A Memorial Tree was ordered in memory of Barbara Louise Powell.  Plant a Tree

Long-time Agility friend and indispensable dog cookie baking partner, you will be sorely missed.   You are with Taiga and Molly now,  Candace and Scott

Plant a tree in memory of Barbara